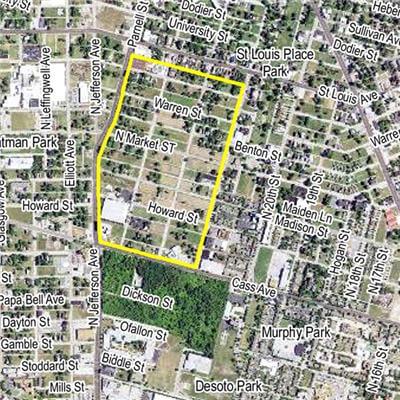 The National Geospatial-Intelligence Agency finalized the deal to remain in Missouri, building its new $1.7 billion western headquarters on a 100-acre site in north St. Louis.

“This is a proud day for St. Louis and for the entire State of Missouri,” said Missouri Gov. Jay Nixon. “This was a tough, high-stakes competition, and St. Louis won decisively.  Not only will Missouri remain home to one of our nation’s most important intelligence agencies, but soon a new state-of-the-art facility will revitalize and transform a blighted area into a safe and vibrant neighborhood. Today’s final decision by the NGA to stay and expand in St. Louis is a shining testament to this region’s vitality, competitiveness, and its people – the hardest working, most innovative men and women in the world. I applaud St. Louis Mayor Francis Slay and the many public and private sector partners who contributed to this landmark achievement, as well as Robert Cardillo and his team at the NGA for making the right decision to stay and grow in our great state.”

NGA announced in March that it favored the Missouri site over one proposed near Scott Air Force Base in Illinois. The city of St. Louis and the state of Missouri made keeping NGA and its more than 3,000 jobs a top priority.

The new site, just north of downtown, is conveniently located adjacent to a variety of innovative and cultural areas. The Cortex Innovation Community and Washington Avenue, both vibrant startup and innovation districts, are to its south and west, and NGA Director Robert Cardillo named Cortex as a key reason the new NGA West will remain in St. Louis.

NGA plans to move into its new home after construction is completed in 2021.

With its strategic location, globally connected infrastructure, competitive business and labor costs, highly-skilled and hard working talent, quality of life, reliable and inexpensive energy, available and affordable real estate, aggressive and performance-based incentives and a statewide commitment to attracting companies and investment, Missouri is a place where companies come to grow and thrive.